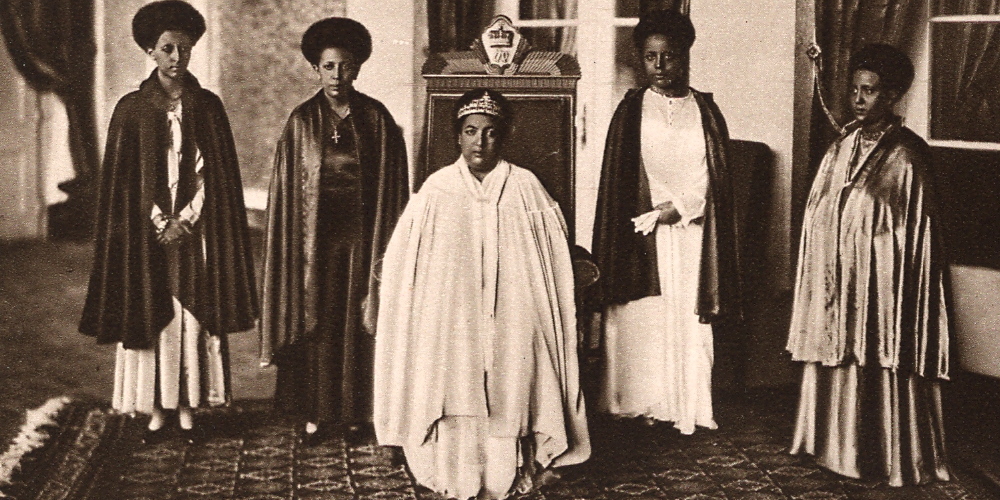 Empress Menen Asfaw, Empress of Ethiopia, and Royal Princesses pose for a photo in the early years of Her reign. With Her Majesty, from left to right, are Princess Tsehai, Princess Tenagnework, Princess Zenebework and Princess Wolete Israel Seyoum.

When Her Majesty, Empress Menen Asfaw, was scheduled to deliver a radio message to the international community about the prospects of an unjust attack on Ethiopia by the forces of Fascism, the world was already teetering on the brink of destruction. Only a few months before, the fate of the major Western powers had been sealed at the League of Nations, when His Imperial Majesty Haile Selassie I delivered a prophetic message about the prospects of a Second World War if His words were not heeded. Newspapers of the time, which we have provided on the sidebar, recount the measures that Fascists and their sympathizers took to try and silence the Queen of Queens from delivering a final warning to the nations, which might prevent the coming tribulations of war.

The Scramble for Africa

Empress Menen's speech can best be understood in the context of what is known to history as the "Scramble for Africa." During the late 19th and early 20th Centuries, a number of European nations including England, France and Portugal secured their control over most of the territory on the African continent through war and bloodshed. This colonial territory expanded their power and influence while benefiting their economic interests at home. With no regard, of course, for the interests of the African people whose lands were invaded. These European nations arbitrarily divided the African continent among themselves, drawing the artificial borders between African countries which mostly remain to this day.

By the time of Empress Menen's speech in 1935, this scramble resulted in the colonization of every nation on the African continent except for one: Ethiopia. The ancient Davidic Kingdom, saved from conquest some would say by divine intervention, had managed to repel both European and Arab attempts at invasion for thousands of years.

The Battle of Adwa 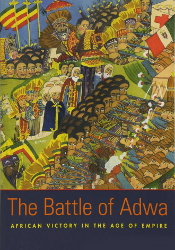 Most famously, Emperor Menelik II and his armies, which included Haile Selassie's father Ras Makonnen as Commander in Chief, valiantly defended Ethiopia from the invasion of Italy in 1895.

Having secured Eritrea and Somalia under their control, the Italians arrogantly presumed they could connect these territories into a larger province with a similar conquest of Ethiopia. They would soon join a long line of would-be conquerors in finding out that subjecting Ethiopia to foreign rule wouldn't be so easy. The legendary Battle of Adwa, where the Italians were defeated handily by Ethiopia in 1896, was the result of that war. Ethiopia's victory caused great embarrassment to Italy and fostered lasting resentment between the two nations.

When the Fascist leader Benito Mussolini came to power in Italy during the 1920's, the stage was set for the Italians to once again resume their role in the "Scramble for Africa." Mussolini soon declared his intention to found a new Roman empire, setting his sights on the nation which had humiliated his predecessors. But this time, the Italians would have a decided advantage, thanks in no small part to a ban on the sale of weapons by Britain, France and other industrialized powers.1

It is in this historical context that Empress Menen delivered the following speech. Though the initial broadcast of the speech was sabotaged by intentional interference,2 the message couldn't be silenced. History tells us that Her plea, like the prophetic words of His Imperial Majesty to the League of Nations, went largely unheeded. The very next month saw the beginning of the Second Italo-Ethiopian War. But Her words stand as a testament to the courage of Her convictions, and highlight the continued need for us to follow Her example and speak out against injustice.

Empress Menen Speaks to the Nations:

Powerful armies are preparing to invade our country under the fallacious pretext of bringing civilization to our pastoral, pacific people, living near nature and in communion with God.

May heaven save us from such a civilization. Under the grave, painful circumstances in which we live and in the presence of the threat of war weighing on us we think women throughout the world have the imperative duty of making their voices heard, expressing their feelings.

In all latitudes, climes and countries women are inspired by the same spirit, the love of peace. War always has been the greatest of the evils to overwhelm humanity. Whatever their native land, women should reprove brute force and detest war which destroys homes and results in the killing of husbands, brothers and sons. 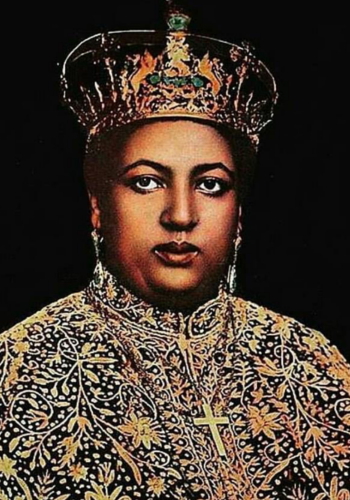 Italian women who are mothers like the Ethiopians suffer at the thought of the infinite, irreparable evil to which war would give rise. All women in the universe should therefore unite their voices to demand firmly that the horrors of useless bloodshed and accumulated ruin should be avoided.

Ethiopia is not actuated by any spirit of violence. She only aspires to peace. In the quarrel which is forced on us the Ethiopian conscience is pure and undisturbed. Ethiopians have always reserved a fraternal welcome for foreigners who have come here to labor honestly.

Imperialistic ambition has arisen in the case of one of our neighbors with whom we only with to live peacefully and have no desire for conquest. We would not dare doubt that the desire for peace, guiding the International Association of Women, would exert an influence on all those destinies presiding over humanity. We earnestly pray to God that He may assist them in their difficult task. We still desire to believe in the efficacy and success of their efforts to that end and shall hope for the maintenance of peace.

But, if despite our prayers war breaks out, we women will know how to accomplish the painful, noble task of dressing wounds and alleviating, as far as possible, the cruel evils that war engenders. It is comforting to think that the women of the entire world will be at our sides as they are today.

1 Harold G. Marcus, author of the book "Haile Selassie: The Formative Years, 1892-1936," explains on page 157 of his book that "Britain, in May 1935 ... [joined] France and other industrial countries in banning arms sales to both potential belligerents. This ban hit Ethiopia disproportionately hard because Italy was 'quite capable of producing for herself sufficient arms and munitions for operations in Abyssinia.'"

At the League of Nations in Geneva, the Emperor went to plead Ethiopia's just cause. The League, fearful of a shadow which would turn into the second World War, did nothing. Shamefully ... 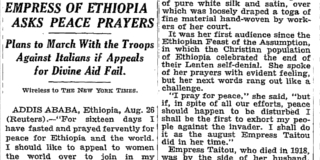 ADDIS ABABA, Ethiopia — "For sixteen days I have fasted and prayed fervently for Ethiopia and the world. I should like to appeal to women the world over to join in my prayer." Empress Menen of Ethiopia voiced this call in a special interview in the reception hall of the imperial palace last night. 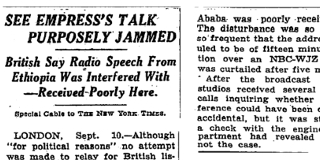 LONDON, England — Although "for political reasons" no attempt was made to relay for British listeners a message of peace by Empress Menen of Ethiopia to the women of the world tonight, some radio experts had no hesitation in saying that the broadcast was deliberately jammed. 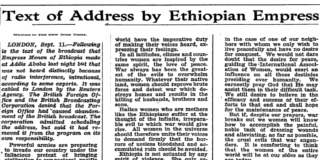 Text of Address by Ethiopian Empress

LONDON, England — Following is the text of the broadcast that Empress Menen of Ethiopia made at Addis Ababa last night but that was not heard distinctly because of radio interference, intentional, according to some experts. It was cabled to London by the Reuters Agency. The British Foreign Office and the British ...