The Prophetic Arrival of Emperor Haile Selassie I in Jamaica 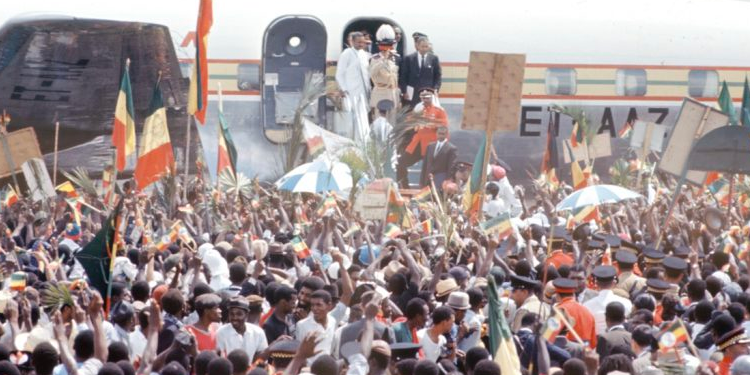 O n April 21st 1966, His Imperial Majesty Emperor Haile Selassie I visited the island nation where the Rastafari movement began — Jamaica. It would be the first time that most Rastafari there were able to see, with their own eyes, the Conquering Lion of the Tribe of Judah. His Majesty's visit to Jamaica was also the scene of what many consider to be the fulfillment of prophecy.

His Majesty Arrives in Jamaica

“Thou didst cleave the fountain and the flood: thou driedst up mighty rivers. The day is thine, the night also is thine: thou hast prepared the light and the sun.” - Psalm 74:15-16

As His Majesty's plane neared Palisadoes Airport in Kingston, Jamaica on the cloudy morning of April 21st 1966, the enormous crowd awaiting Him was drenched by rain. Dr. M. B. Douglas, an eyewitness to the event, described the conditions that morning: “The morning was rainy and many people were soaking wet. Before the arrival of the plane, the Rastafarians said that 'as soon as our God comes, the rain will stop.'” 1

As His Majesty's plane approached, the rain did stop, and the bright light of the sun pierced the clouds. "On this occasion, too, Heaven sent a sign: it had been raining incessantly for hours, but as the aircraft carrying the Emperor came into view on its landing approach, the sun suddenly broke through the clouds." 2 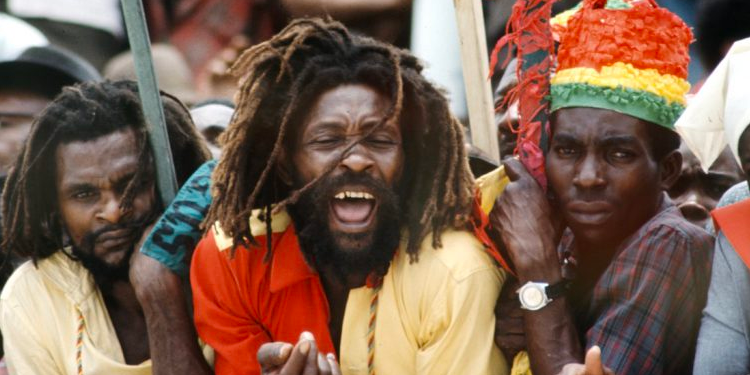 Brother Alex, a Rastafari elder who was also present at His Majesty's arrival, described the events of the day: "Rasta say him God no live in no sky, but God did come from the sky that day. When the plane break the clouds the rain stop immediately. And a wind blow, and all man dry again, just like a miracle. Then we see seven white doves, and the crowd of people go crazy." 3

"And John bare record, saying, I saw the Spirit descending from heaven like a dove, and it abode upon him." - John 1:32

The seven white doves reported by eyewitnesses become even more significant when examined in the theological context of the Bible. The Gospels report that, when Jesus was baptized, the Holy Spirit descended upon him in the form of a dove. After this, the voice of God echoed from the clouds.

Thus, His Majesty's arrival from the clouds, heralded by seven white doves, was a clear sign to Rastafari of the time signifying the fulfillment of Biblical prophecy and the dawn of a Messianic age.

"At that time they will see the Son of Man coming in a cloud with power and great glory. When these things begin to take place, stand up and lift up your heads, because your redemption is near." 4 - Luke 21:27-28 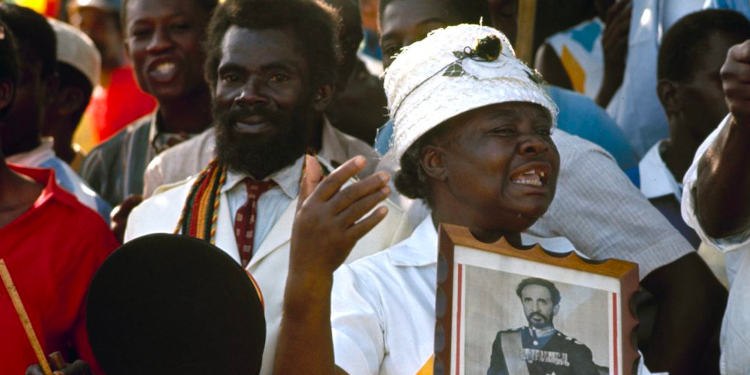 "And when he was come near, he beheld the city, and wept over it, Saying, If thou hadst known, even thou, at least in this thy day, the things which belong unto thy peace! but now they are hid from thine eyes." - Luke 19:41-42

Wherever His Majesty traveled in the world, huge crowds gathered to greet Him. But nowhere was the reaction greater than at Palisadeos Airport in Kingston, Jamaica on the morning of April 21st, 1966. When the door of His Majesty's plane opened on that morning, He was met with the awe-inspiring sight of tens of thousands of Rastafari rejoicing at the occasion of His arrival.

"The crowd was so thick around the plane that the Emperor was unable to get out for close to thirty minutes... Mortimo Planno... was called over the public address system to the plane. He went up the ramp, shook hands with the Emperor, turned and informed the crowd to clear the way for the descent of the Emperor." 5

As far as the eye could see, there was a sea of red, gold and green. The thousands of Rastafari present waved the Ethiopian colors and held pictures of His Majesty as they rejoiced, along with banners and signs proclaiming His divinity. Overwhelmed with emotion upon seeing this - His Majesty wept.

"[Planno] said when the plane door open and him did see His Majesty, the King was weeping." 6 Newspapers of the time corroborate His Majesty's tearful reaction to the tremendous crowd of Rastafari who met Him that day.

But some raised doubts about the reason for His tears: "The tears welled up in His eyes and rolled down His face. It will perhaps never be known whether He cried in sorrow at the uncontrollableness of the vast throng of Jamaicans who had gathered to meet him, or out of pure joy; but whatever it was, it was an emotional reaction to a highly emotional welcome." 7

But we know, from His Majesty's own words, that His tears were in fact tears of joy, in response to the "wonderful reception that was accorded" 8 to Him.

"Of the welcome His Imperial Majesty said later that He was overwhelmed and deeply moved. It demonstrated, He said, the close ties and affection which bind the people of Jamaica to Africa and Ethiopia." 9 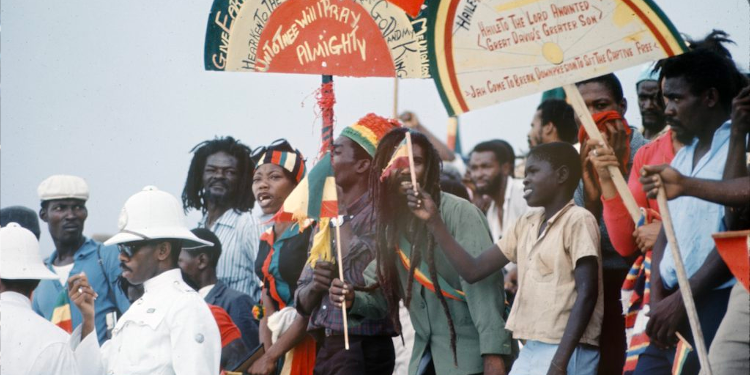 "On the next day much people that were come to the feast, when they heard that Jesus was coming to Jerusalem, Took branches of palm trees, and went forth to meet him, and cried, Hosanna: Blessed is the King of Israel that cometh in the name of the Lord." - John 12:12-13

As the Emperor descended from His aircraft, the enormous crowd of Rastafari waved palm leaves and sang songs of praise as they beat on nyabinghi drums to welcome Him. Of this reaction, one cannot help but draw parallels to the welcome given to Christ on his arrival in Jerusalem, as recorded in the Gospels. A further reading of the Biblical text also reveals counterparts in the Book of Revelation.

"After this I beheld, and, lo, a great multitude, which no man could number, of all nations, and kindreds, and people, and tongues, stood before the throne, and before the Lamb, clothed with white robes, and palms in their hands; And cried with a loud voice, saying, Salvation to our God which sits upon the throne, and unto the Lamb." - Revelation 7:9-10

"And Levi made him a great feast in his own house: and there was a great company of publicans and of others that sat down with them. But their scribes and Pharisees murmured against his disciples, saying, Why do ye eat and drink with publicans and sinners?" - Luke 5:29-30

Brother Bongo, a Rastafari elder, provides details of the meetings between Rastafari and the Emperor: "We were invited to three separate occasions with His Majesty. One at Kings House, one at the stadium when His Majesty was at the National Stadium, and one at Sheraton Hotel where He met all the people." 10 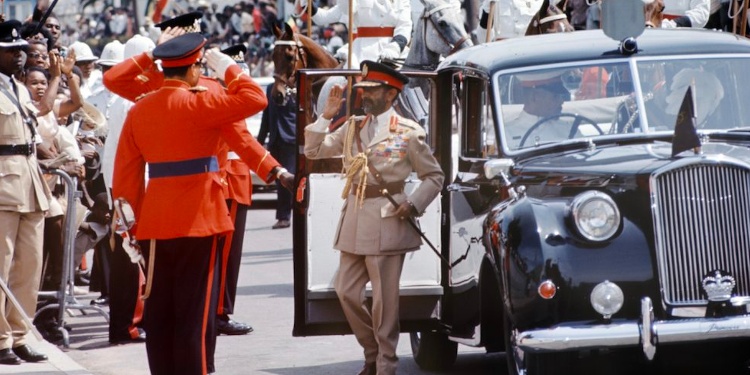 There were those within the government of Jamaica, and among the elites of Jamaican society, who were appalled at the sight of dreadlocked Rastafari at King's House being treated as their equals. But His Majesty, true to His mission, welcomed the outcasts of society by inviting them to dine with Him in the most prestigious setting possible:

"Haile Selassie I sent a powerful message. The Emperor, by inviting the Rastafari to eat with Him, and by giving them gifts of gold medals, used His authority and presence as a monarch and world diplomat to empower them. Moreover, the Emperor acted in a Christ-like fashion. He sat and broke bread with pariahs... The authorities who spurned Rastafari now had to sit with them." 11

Not only had His Majesty welcomed the Rastafari to join Him in the company of the most influential leaders of Jamaican society, but He also awarded them by giving them gifts. "Haile Selassie met a delegation of Rastafarians in the King's House, the governor-general of Jamaica's residence in the capital. He gave them gold medallions as gifts..." 12 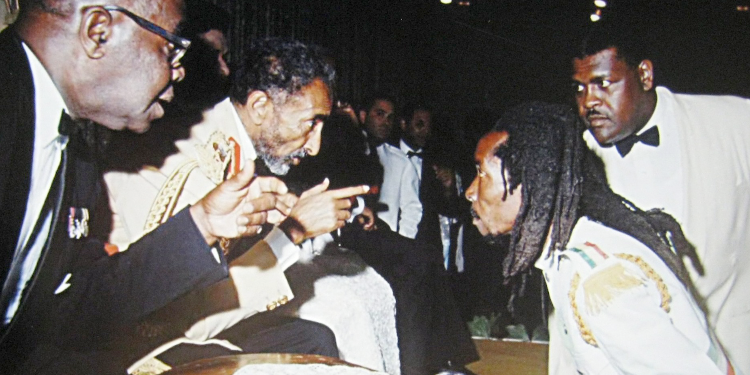 This is reminiscent of another Messianic prophecy contained in Psalm 72. A Psalm which was also read at the Coronation of His Majesty as Emperor of Ethiopia on November 2nd, 1930.

"Yea, all kings shall fall down before Him: all nations shall serve Him. For He shall deliver the needy when he cries; the poor also, and him that hath no helper. He shall spare the poor and needy, and shall save the souls of the needy. He shall redeem their soul from deceit and violence: and precious shall their blood be in his sight. And He shall live, and to Him shall be given of the gold of Sheba: prayer also shall be made for Him continually; and daily shall He be praised." - Psalm 72:11-15

One Rastafari elder added, "His coming lifted us from the dust and caused us to sit with princes of this country;" while yet another saw His visit as comparable to the triumphant entry of Christ in Jerusalem." 13

The Rastafari movement began when Ras Tafari Makonnen was crowned Emperor of Ethiopia in 1930, taking as His royal name Haile Selassie I, meaning "Power of the Trinity."

For the three and a half decades that followed, members of the Rastfari movement were ridiculed and labeled as outcasts of society. Rastafari were oppressed and humiliated by the authorities, who sought to suppress the movement and wipe Rastafari from the map.

Through it all, Rastafari persevered. When His Majesty visited Jamaica on Grounation Day, He gave the Rastafari movement a renewed legitimacy, and laid the foundation for Rastafari to grow into the worldwide culture it is today.

© Rastafari Coalition. All Rights Reserved. "The Prophetic Arrival of Emperor Haile Selassie I in Jamaica" was written by Mosiyah Tafari for exclusive use by the Rastafari Coalition. No part of this article may be reproduced without the permission of the copyright owner except in the case of brief quotations, with citation. For further use, please Contact Us.

2 Asserate, Asfa-Wossen. King of Kings: The Triumph and Tragedy of Emperor Haile Selassie I of Ethiopia (p.293). Haus Publishing.

12 Asserate, Asfa-Wossen. King of Kings: The Triumph and Tragedy of Emperor Haile Selassie I of Ethiopia (p.294). Haus Publishing.